Dimmers are always a source of confusion for customers. It used to be simple: any dimmer could be used on an incandescent bulb and no dimmer could be used on a florescent tube light (With a few exceptions but was generally true for domestic lighting). However with the many different types of lamps now available, it’s difficult to match-up a dimmer with a lamp.

So lets look at the main dimmer types and how they work with different lamp technologies: 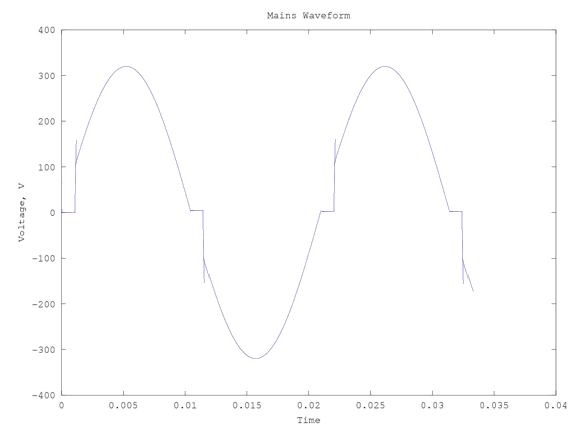 The leading-edge dimmer is the older type of dimmer technology which is cheaper and more extensively available than the trailing-edge type.  In this dimmer the mains voltage is clipped at the start of each waveform as shown below.

This works well for all incandescent lamps where there is just a resistance in the circuit however there are issues when the circuit is more complicated (i.e. LED and CFL lamps).

The issues occur because the waveform is clipped at the start, causing the voltage (and current) to shoot up suddenly as the dimmer switches from off to on (as shown in the figure above). This sudden big jump can cause issues with the electronic circuits in the LED and CFL lamps. Both these lamps initially convert the mains AC voltage into a flat DC voltage. This process typically involves a rectifier to convert the negative parts of the waveform to positive and large capacitor to smooth out the waveform.

When there is a large jump in the voltage, the rectifier works normally but the capacitor cannot smooth such a big change in voltage causing the output to be quite bumpy rather than flat. The bumpy waveform can cause the next part of the bulb circuit to switch on and off causing a strobe effect. There is also a danger of an over-shoot in the voltage causing damage to the other electronics.

Some newer LED lamps do have additional electronics to cope with these problems however it is still recommended that LED lamps are paired with trailing-edge dimmers where there is no issue ensuring a long life for the bulb.

The trailing-edge dimmer is the newer technology where the mains voltage is clipped at the end of the waveform.

They are more expensive than the leading-edge technology but are more suited to the LED and CFL lamps. They work equally well with incandescent bulbs however the expense is not usually justified, as leading-edge dimmers will work in those scenarios. The characteristics that make these dimmers more suited to LED and CFL lamps are the smooth increase in voltage and sharp cut-off, smoothing capacitors are much better at dealing with these changes ensuring that they produce a flat output for the next stage of the lamp. 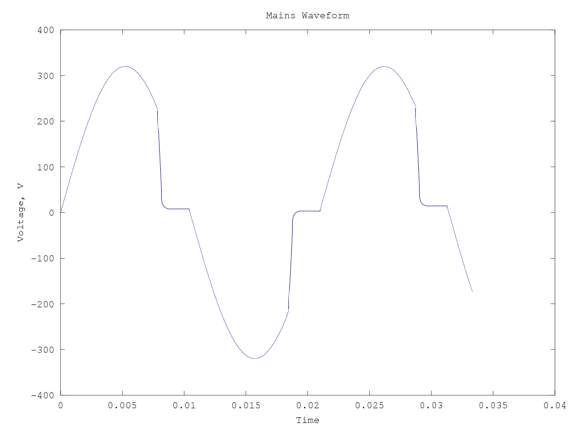 Another issue that applies more to LED lamps but can also be an issue with CFL lamps is the minimum load power that the dimmer requires. Leading-edge dimmers are usually the culprit for these problems but it’s always worth checking the minimum drive power on any dimmer. For example the typical minimum load power on a leading-edge dimmer is 25W, so at its lowest output it will supply 25W before turning off. For a 100W incandescent lamp, 25W will be very dim (non-linear at low power so less than 25% brightness). Now switch to LED lamps that typically require 7W at max brightness and you now have a very expensive on-off switch. This is because the LED lamp will never drawer enough power for the dimmer to activate. If you have many lights then you can increase the load but because LED lamps are so efficient you may need a lot of lamps to generate a power that would be in the range of the dimmer. Another solution is to add ‘dummy’ loads onto the dimmer circuit to bring it into it’s operating range but then the efficiency of the LED lamp is lost and it would probably be simpler to use a standard Halogen lamp.

Unfortunately there is another problem with adding lots of LED lamps to a single dimmer.  You may think it’s just a matter of summing the LED power requirements and checking they are below the dimmer rating but you’d be wrong. When it comes to LED lamps nothing is linear and while it may average at 7W in power it will have peaks in the current requiring a significant margin to be applied to its power requirement. So if you have a 400W dimmer you cannot use 57 7W LED lamps (400/7). As a rule of thumb you can divide the dimmer wattage by 10 to give you the maximum number of lamps. So in this case five 7W lamps can be used on a 400W dimmer. Many of the new trailing-edge dimmer modules can drive more LED lamps and typically include advise on the packaging.